Apps to Help You in the Great Outdoors

Since the invention of the smartphone, it’s been a little easier to head into the great outdoors because we have access to better information, easier navigation, and faster communication. Apps for Android and iPhone have made it far easier for novice adventurers to explore nature.

While you may find that Citymapper, Google Maps, and Waze are great for getting around towns and cities, they’re all but useless in mountains and forests. Instead, you need dedicated navigation maps that are designed for rural areas.

Maps 3D Pro is a great option for when you’re planning to head along a route that contains a lot of hills and mountains. Instead of showing you a flat map, it provides a 3D visualization of elevation changes. This makes it much easier to grasp the steepness of a climb at a glance when compared to a traditional topographical map which uses contour lines to show changes in elevation.

Other options include Spyglass, which is an augmented reality navigation app that overlays a map and compass to the feed from your camera, and BackCountry Navigator for Android, which uses map data from several sources and lets you plot your route before you head off.

Entertainment
Getting out into nature is a great way to switch off from the backlit world of modern living. Sometimes though, bad weather can force you into your tent and necessitate finding some other form of entertainment. Thankfully, there are plenty of options.

If you’re a bookworm, the Kindle or Audible apps from Amazon are great options, giving you the opportunity to immerse yourself in a different world.

For gamers, there is a plethora of mobile titles from classic card games like PokerStars, where you can play in games and tournaments for free using play chips, to racing games like Asphalt 9: Legends, an arcade-style racing game that features real-life hypercars.

You can also use streaming platforms like Netflix and Amazon Prime to watch your favorite box sets and movies. If you think the mobile signal won’t be great where you’re going, you can plan ahead by downloading some episodes or films to your device to watch offline. 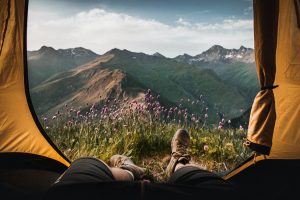 Finding a Place to Stay
If you want to spend longer than a few hours in the great outdoors, you’ll need to camp out. Thankfully, there are several options to help you find a good spot.

One of these apps is Hipcamp, which could be considered a sort of AirBnB for camping. It helps to match you up with owners of private land that will let you camp on their property. If you prefer to use a commercial campsite, then apps like iOverlander, Tent App, and The AllStays Camp provide comprehensive coverage of sites across North America and several other regions.

In some instances, it’s also possible to make a booking directly through the app, making it much easier to plan out your journey.

Fitness Tracking
If you discover a beautiful spot that you want to return to, it can sometimes be a struggle finding it again. Apps like MapMyHike can help with this by using your phone’s GPS to plot out your journey, giving you a helpful map that you can use next time.

MapMyHike and other apps like Fitbit and Strava can also show you stats like distance travelled, steps taken and calories burned. If you have a Fitbit device, you can also use it to track your heart rate whilst you hike.

Word of Warning
While smartphones and apps have brought some of the convenience of modern life to hiking and camping, it’s important not to solely rely on them. Poor signal, cold weather, and a flat battery can render your smartphone useless, and if you have no backup, you could risk putting yourself in danger.

So be sure to pack a map and compass, and anything else you feel may help you while you’re out in nature.