HIP New Jersey’s December Fabulous Female is Jersey City’s Kimberley Bueno-Schonig. At the young age of 23 Kimberley is a successful entrepreneur, wife, volunteer and fur mom.  At the young age of 20, Kimberley started making her mark, when she graduated from the University of California with a degree in Politics and Legal Studies.  After graduation, despite being offered a position at a lucrative firm in Silicon Valley, she decided to make the move to NYC.

While in NYC Kimberley worked for top Japanese bank. Her responsibilities where covering recruitment and hosting corporate events. Kimberley was able to save money and found an apartment in nearby Jersey City, which she now calls home.  After some time at the bank, she received an offer to work for a major quantitative hedge fund.  At the hedge fund, her responsibilities included handling employee grievances, investigations and terminations.

Like most bright, determined and driven people, working in corporate America was not enough for Kimberley.  She wanted to be her own boss, and she had high aspirations of making a difference.  After leaving her corporate job, Kimberley and her husband decided to take their pet sitting business to the next level. At this time The Cuddly Cottage and the Cuddly Boutique where born. Both of these companies are part of Cuddly Ventures. Cuddly Ventures is “a conglomerate that currently operates a pet sitting business, and a pet supply boutique that sells apparel and toys for animals.” 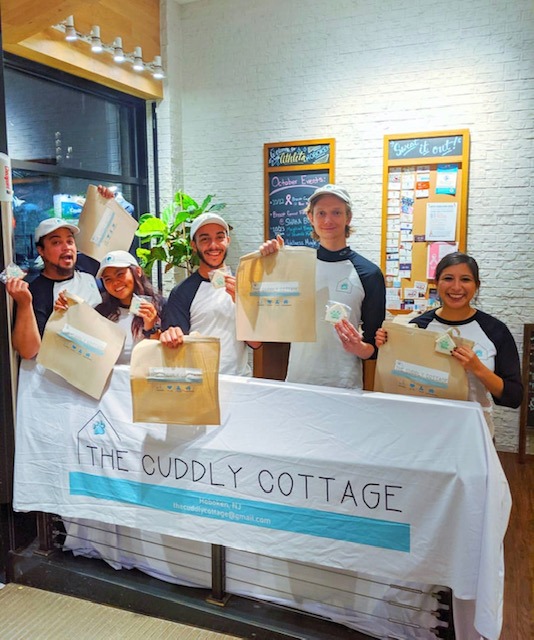 Not being one to do things on a small scale, shortly thereafter Kimberley also decided to start Women Entrepreneurs of Hudson County. The idea came about while researching how she could form her own business.  Kimberley realized there was not a platform for other women entrepreneurs. Her wheels started turning and she decided to create a Facebook page, to help her find mentors and inspiration. Her page quickly grew and became active with networking opportunities and local resources. Kimberley then had the idea to organize an event and from there things took off.

Women Entrepreneurs of Hudson County is a non-profit organization focused on supporting and empowering female entrepreneurs.  Kimberley’s organization provides resources and opportunities, by hosting monthly networking events.  One of the events happens to be the First Annual Women Entrepreneurs conference.  This event allows up and coming entrepreneurs to meet with experts who are willing to share experiences and knowledge in running your own business, as well as how to overcome obstacles you might face along the way. Whether you are looking for networking opportunities, collaborations, partnerships or just support, WE of Hudson County provides all of that.  Kimberley is very proud of the work she has done and the connections she’s made, or has helped to facilitate.

Being an advocate of female empowerment, and supporting your fellow fabulous females, I asked Kimberley to tell me ways in which she feels queens can support each other. Her philosophy is that it’s “the simple things”, follow each other on social media platforms, like or comment on posts, share content, show up to each other’s events and pay full value for good or services.  At the end of the day Kimberley believes there’s enough success out there for everyone who works hard.

With all that Kimberley is juggling, I had to wonder how she stays organized. While she admits it’s a daily struggle she finds that keeping a notebook helps. She’s able to write down her thoughts, ideas and a To Do list (who doesn’t find it satisfying to cross things off a To Do list!?).  Kimberley also maintains multiple calendars. While she loves technology, in her opinion sometimes it’s better to have a visual – something I agree with considering I have a huge whiteboard in my office.

Considering that Kimberley is an advocate of supporting our fellow females, and entrepreneurs, I asked her who her biggest support system is. That was an easy question, for Kimberley, as it’s her husband Tom.  She said he’s a supportive and encouraging partner pushing her to manifest her dreams. So much so, that Tom recently quit his job to help Kimberley run The Cuddly Cottage (and inspired by his wife so much that’s he’s decided to start his own business on the side)!